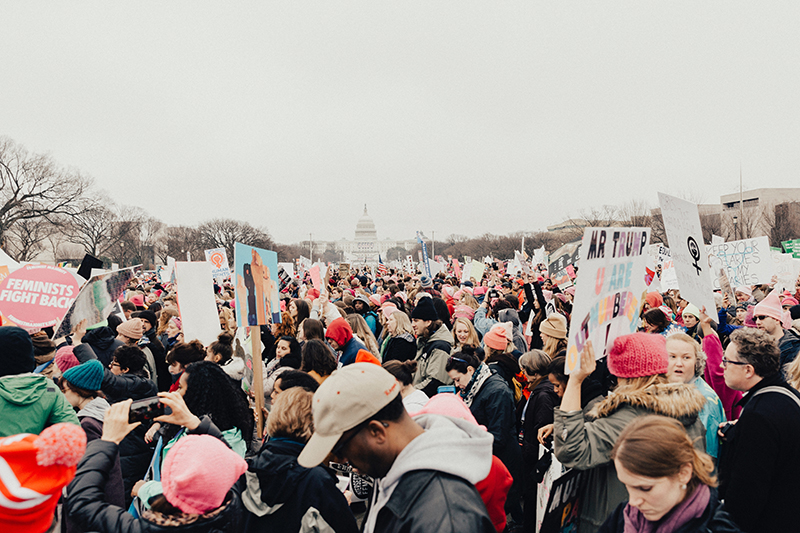 In Defense Of The Modern Day Protest

I didn’t grow up in a household that valued politics or followed them or gave much of a nod to world events. I don’t remember having charted discussions about the happenings of the world as it extended outside the walls of my home. There were enough trials to face inside that we diverted our attention there.

Still, in my efforts to make advocacy feel accessible and encourage others to get involved, I’m still met with resistance. Modern American politics is a scary place to be. It’s divisive and intimidating, but I have to continually remind myself that positive change, advancement, and national identity come from the top of leadership down. Fighting for things that matter has long been a part of the story of America and that still rings true today.

Many of us think that we’re living in a world where things really aren’t that bad, especially when compared to other countries. We go to work, come home, care for our families, and go about our lives. But the truth is, if you find yourself unaffected by American politics and you have the capability to simply turn off the news should you be too bothered by it, you my friend are privileged.

When our brothers and sisters are raising their hands to fight against injustices- when their lives are on the line- when their children are at risk- when their communities are being torn apart- we need to listen. We need to open our hearts and pay attention because turning away and resolving to do nothing is taking the side of the oppressor. We need to join hands with our friends and neighbors and acknowledge their cries, employ extensive empathy, offer them help, and surely respect their right to assemble.

I’m not suggesting that every person needs to participate in the physical protests, but no matter your race, gender, or socio economic status, you have been positively affected by the progressive voices marching in the streets, demanding to be heard. Protests are how we get things done, how we fight back, how we move forward against administrations and systems of power. We fight by making a scene, causing a stir and refusing to be ignored. We do it through sheer numbers.

I thought that it would be helpful for us to brush up on our history and remind ourselves of the societal progress that was largely impacted by protests. Here are just a few American protest movements that paved the way for legislative and cultural change.

In December 1773, protesters gathered in Boston Harbor to reject the latest shipment of tea from the East India Company. They were speaking out against the Tea Act, which allowed the East India Company to sell its tea at reduced cost, thus giving the British government-controlled company an effective monopoly. As the story goes, the colonists stormed the ships as they pulled into the harbor and chucked some 46 tons of tea overboard.

The real issue at hand, of course, was the colonists’ lack of representation in the British Parliament. That night, their cries reverberated near and far, and helped spur a movement that would see the states gain their independence from Mother England in just a few years

From income tax to Prohibition, the Constitution underwent a lot of change in the early 20th century, but perhaps none was more important or positive than the 19th Amendment, which formally granted women the right to vote. The women’s suffrage movement in the U.S. dates as far back as the Revolutionary War, but women’s rights trailblazers, such as Elizabeth Cady Stanton, Susan B. Anthony and Lucretia Mott, spearheaded the strong push for equal voting rights in the mid-19th century. After the Seneca Falls Convention in 1848, the rallying cry for women’s right to vote became a yell too loud to ignore. In 1920 — 41 years after it had originally been drafted — Congress ratified an amendment that said: “The right of citizens of the United States to vote shall not be denied or abridged by the United States or by any State on account of sex.” Although most of the pioneering suffragettes died before winning the right to vote, to this day every woman has them to thank.

The more than 200,000 people who descended on Washington, D.C., on August 28, 1963, proved that protests don’t need to be violent to be powerful. In addition to meeting with President John F. Kennedy and members of Congress, the groups’ leaders led a march from the Washington Monument to the Lincoln Memorial. The gathered masses stood peaceably for hours in the stifling August heat as musicians and orators appealed for equal rights for African Americans and, really, all minorities. Thanks to powerful words from civil rights champions, including Martin Luther King Jr.’s famed “I Have a Dream” speech, the march went down in history as the most convincing event in the movement that led to the successful passage of the Civil Rights Act of 1964.

From the textile factories in Lowell, Mass., where the first labor unions were formed, to the railroad strikes in the Southwest led by the Knights of Labor, which thrust unions and their demands into the national spotlight — there have been many triumphant moments in labor movement history. But not every moment was so joyous. Indeed, it’s a tragedy that we have to thank, in part, for many of the standards and workers’ rights we now enjoy. The Triangle Shirtwaist fire in 1911 started as a small factory fire, but quickly became the deadliest industrial accident in New York City history due to insufficient fire escapes and factory bosses giving little care to fire and safety measures. In the aftermath, a commission was formed to investigate the cause of the 146 deaths, and within a few years, legislation was introduced to create and enforce stricter workplace-safety laws, safer factories and shorter hours. But the movement didn’t stop there. The tragedy boosted the strength of the burgeoning union movement and went on to inform many of the rights we enjoy today, including minimum wage and collective-bargaining rights.

On Sept. 17, 3,000 people assembled at Battery Park with the intention of occupying Wall Street to protest greed and corruption in the government and financial system. They didn’t succeed — at least not geographically. Denied access to Wall Street, the protesters instead found a home at nearby Zuccotti Park, just around the corner from Ground Zero in lower Manhattan. During the first week of the occupation, some 300 people camped out, crafted a motto (“We Are the 99%”) and organized small-scale marches to protest a system that they say bailed out the banks and left everyone else to fend for themselves. It was a message that resonated. Within a month, the Occupy movement gained momentum, spreading to cities across the U.S. and around the world. Though it’s hard to say at this point what, if any, long-term effects the movement will have, efforts to silence the masses — such as mass arrests, evictions from protesters’ strongholds, and in some cases, incidences of alleged police brutality — have so far only served to fuel the fire. After protesters were evicted from Zuccotti Park and other encampments across the country, Occupy Wall Street declared November 17 a Mass Day of Action. To commemorate the movement’s two-month anniversary, protesters took to the streets in New York City and beyond to send a definitive message — It doesn’t matter how long it takes, their voices will be heard.

Let’s Hear it for the Boy(s)